In this part of Krabi town, it’s easy to get lost in the thick shrubby layers of the mangrove forests. Surprisingly though, these lush shrublands are man-grown, as I later learnt, and they essentially and effectively protected Krabi from the Tsunami that devastated many parts of southern Thailand on this side of the Andaman Sea back in 2004. 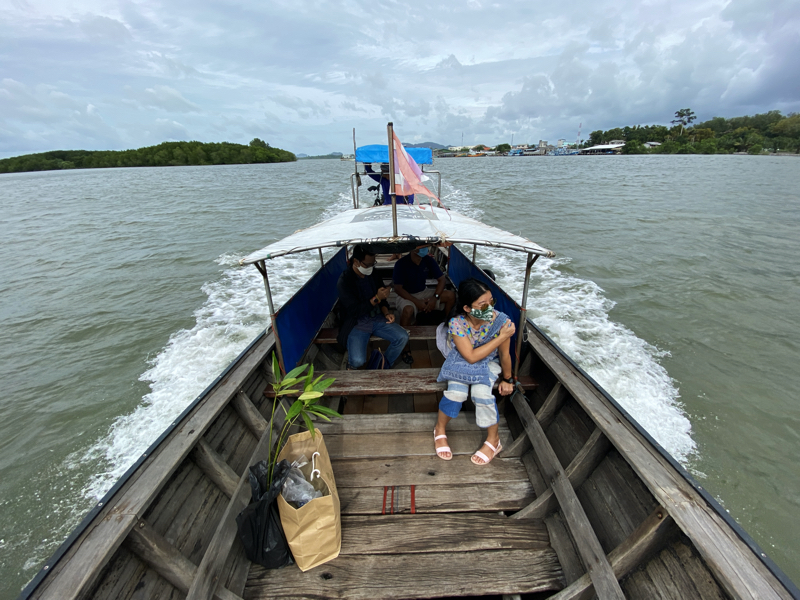 We were having a day-trip to a small community called Ko Klang in the province of Krabi, the coastal tourist paradise in the Thai south. As it turns out, Krabi is dotted with archaeological treasures. Among them, the already famous Shell Cemetery in the middle of the city centre. Krabi’s ancient gateway of Khao Khanab Nam on either side of the riverbanks.

But here we are, in a wooden southern sea style fishing boat called ‘Ruer Hua Thong’ – unique for its high-beam keel, a local way to manage the windy and sometimes treacherous situations of the seas of the area.

The thick grey-smoky clouds are above and beyond us. It has been raining on and off since our arrival here during the last few days of July. Upon disembarking the speedboat of Rayavadee, the staff who joined our ride to Nong Nuch Pier waved us goodbye and good luck. “May the sun be with you both,” they said over the cacophony of the ride. “May the sun be strong enough for you to explore the city safe and dry.” Another Reur Hua Thong passing by with the limestone mountain as the backdrop.

The Hua Thong boat (เรือหัวโทง) was run by a local from Ko Klang. But instead of directly head east towards the island, we weaved a detour north. Krabi town is blessed with a rich river delta, and we were on the main channel – Pak Nam Krabi, passing the city’s much-coveted Mud Crab (Pu Dam) statues and directly upon us are Khao Kanab Nam – the two limestone mounds, each on each side of the riverbanks, another big emblem of the city, an ancient sign that you have arrived in this township. Me and the dragon head Reur Hua Thong, the dragon a leftover from the 2018 Krabi Biennale Art Festival.

But we are going beneath Khao Khanab Nam on the right bank (coming from the sea, heading north), where, back in the early 1970s, it was declared an archaeological site thanks to an array of excavated findings that included, believe it or not, a giant human skeleton and a serpent, buried in the position of their pre-death brawl. Khun Jirapong Jeewarongkakul from the Enlive Foundation who was our guide of honour that day, says the prehistoric findings continued until even today, and that reflects the innate natural abundance of this area that stretches all the way to Satun province further south where more findings of ancient lives at least 500 million years back were the reason Satun was enlisted to be preserved as a UNESCO Geopark. About to climb the stairs up to Khao Khanab Nam cave.

Today, one can visit Khao Khanab Nam, climb up the stairs, and enjoy the instalments of the findings’ replicas. Some of the real things are on exhibits, along with other prehistoric findings of Krabi, at Krabi Power Plant Fossil Museum. 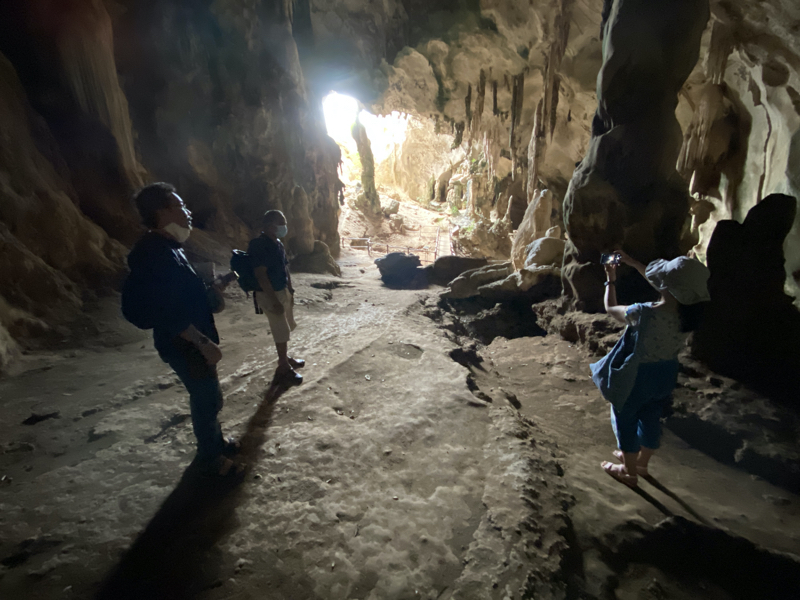 The cave inside Khao Khanab Nam is filled with stalagmite and stalactite, although, as Khun Jirapong explained, they are mostly ‘dead,’ meaning the natural growth and glittering are no longer happening. Limestone mountains, as I learnt, work like a giant sponge. That’s why there are streams inside a cave. That’s why trees can grow on the seemingly barren surfaces of the limestone mountain. That’s why the whole ensemble of limestone mountains, mangrove forests, and the knowledge to preserve the environment must be perpetuated side by side to maintain a well-balanced ecological system. Khao Khanab Nam Cave got a world’s attention back in the early 1970s when prehistoric excavations were found.

The Power of Mangrove Forest – After the cave, we continued on our Reur Hua Thong along the main waterway weaving into thicker and sometimes narrower channels of the mangrove forests. We saw a few locals on their so-called Reur Pleet เรือพลีต – a small man-made boat narrow enough to weave into even the tiniest alleys of the mangrove forest – picking mud crabs and so on.

I was definitely surprised to learn that most of these thickets are man-grown. The results of years of repetitive reforestation. Local plants in the mangrove forest work as a team, each trying to expand their own domains, sometimes defeating others in the process. Underneath all that is the so-called Mud Lobster or Mangrove Lobster whose soil-digging nature breathes the earth and expand the soil, a natural land-reclaiming mogul, if you will. The earth mounds at the roots of the mangrove trees are the works of mud lobsters residing in this underworld. They are the natural land reclaimers, their earth-digging nature breathes the soil and expands the land, allowing land trees to grow. The rich delta of Krabi town is riddled with mangrove forests, most of them man-grown, a result of years of repeated reforestations. They provided effective protection when this area was hit by the Tsunami back in 2004. 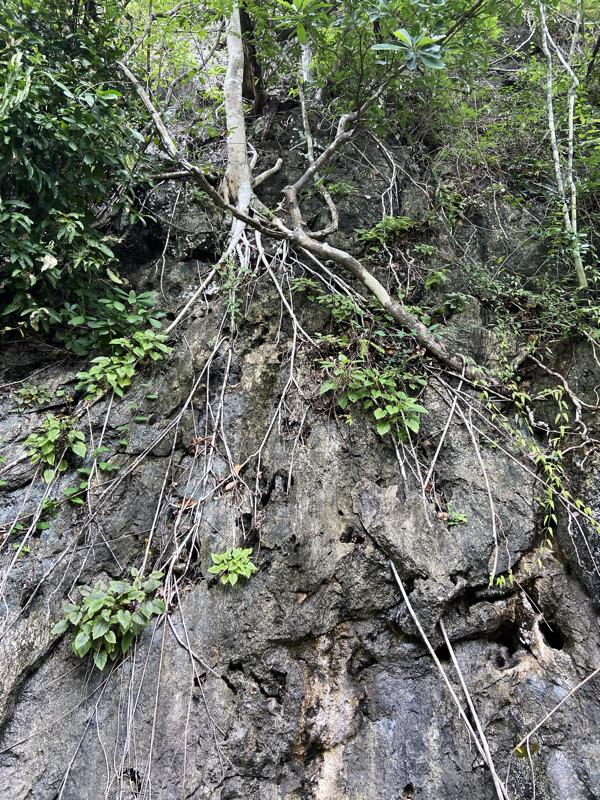 Limestone mountains are like sponges with water and minerals and that’s why trees can grow and thrive on this seemingly barren and brown mountain surface.

Ko Klang – We eventually arrived at Ko Klang. And as soon as we disembarked the boat, the rain, which held loosely throughout the boat ride, poured down. Ko Klang is special because the community here unanimously refused to have a bridge built over. The result is the local lifestyle still pretty much pristine, serene and green. This is a Muslim community. They grow rice called Khao Sang Yod – a GI-protected rice species of Phattalung province. But here, on this island, they are grown on a communal paddy rightly riddled with taut-and-glossy-skinned water buffaloes. The rice planting season starts in August and the harvest is towards the end of the year when the green paddy turns into golden hues of fat rice husks. Ko Klang in Krabi is known for their Khao Sang Yod – a typically southern specie of rice that grows well in brackish water.

Khao Sang Yod (below) is long and thin-grained rice, delicate not unlike the basmati kind. But they are uniquely red with the Anthocyanin-rich bran. The texture is as tender as the normal white Jasmine rice. I bought myself a two-kilo sachet. And I cooked it once, using the rice-and-water ratio as I would with white Jasmine rice. The cooked Sang Yod rice is tender, mouthful and with a distinctly sweet aroma. And I love it. 😀 Khao Sang Yod at Ko Klang community. The bran of the rice is Anthocyanin-rich. 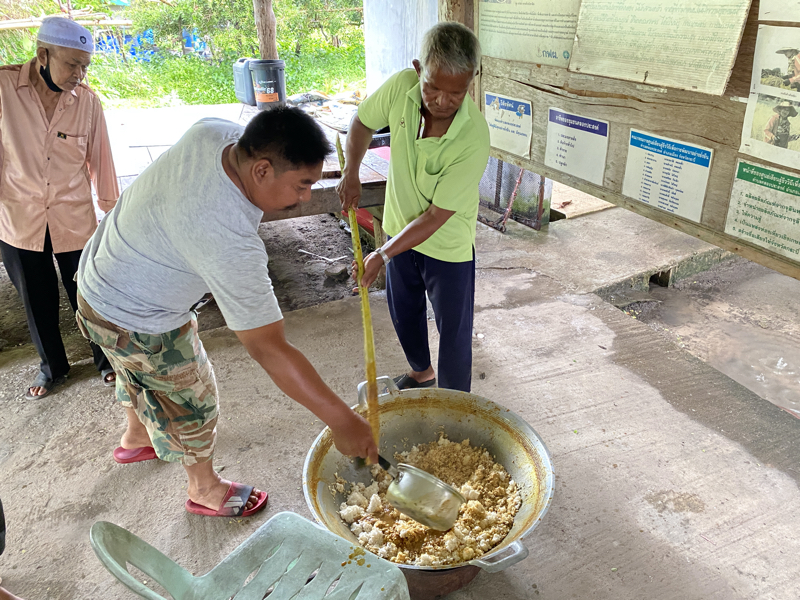 Ko Klang is a Muslim community. We were there on a religious holiday and the community was getting together for a mutton curry feast. The rice was being mixed with the curry for taste and to cleaning off the pan. Yumm! A motor rickshaw is a norm on Ko Klang. Most of the time you will find a local who doubles as a driver and a savvy local guide.

Ko Klang has become a semi-tourist destination with ritual stops at places that are open for touristy queries and observation. Apart from the traditional rice-milling place above, there are also a home-run batik workshop, Ruer Hua Thong workshop, roti kiosks, waterfront seafood restaurants, and a lot of homestay opportunities on the island. A perfect and educational and definitely laidback day out for us. Reur Hua Thong is a traditional boat of the Thai Andaman southern seas. The high wooden beam keel is the local indigenous design to deal with the rough and sometimes treacherous seas. Above is the museum of the Reur Hua Thong. The communal rice paddy of Ko Klang. The planting usually begins late in July – August, the harvest when the paddy glows into golden hues is December. 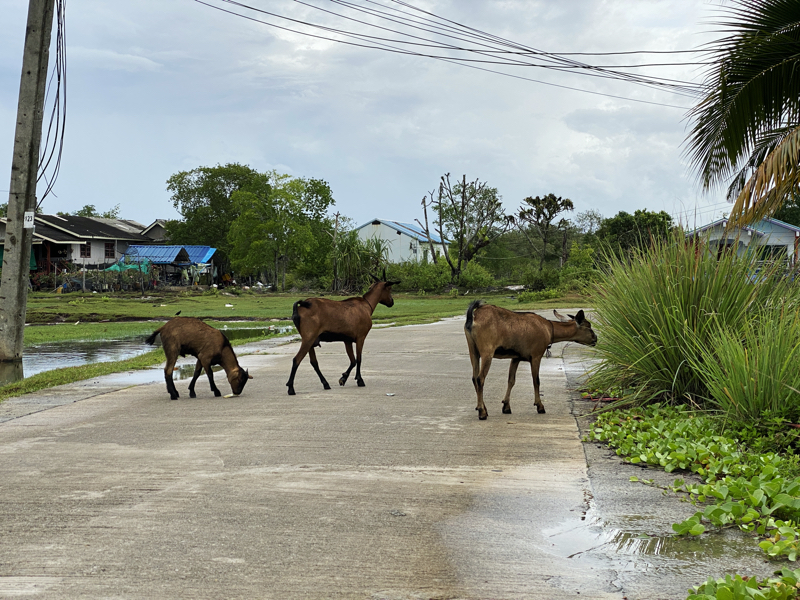 What are these animals called? Snoopers?