Above: All golden and gilded – elements of many royal temples within the Bangkok Old Town vicinity.

Recently, I found myself going back to Bangkok Old Town, or the Rattanakosin Island, a lot. I think this is because I have come full circle, and now are getting more appreciative of my own country’s traditional treasures (after trotting the world quite a bit), and also because of my accumulative readings, which brought lights to things that I grew up with all my life. I am now seeing things here with a more wholesome story patched by pieces and bits here and there from all the stories I gathered. Great fun to retrace the stories of my own roots.

So, here I am, trying to get things nice and easy for fellow travellers who are visiting Thailand. Wouldn’t it be nice if you come here to Bangkok, prepared and informed, ready to get the most out of your days in town?

Read More of Our Bangkok Guides

26 Best Dishes to Eat in Bangkok

Above: The map of Rattanakosin Island or Bangkok Old Town, the centre of it all.

1. The Grand Palace and The Temple of the Emerald Buddha 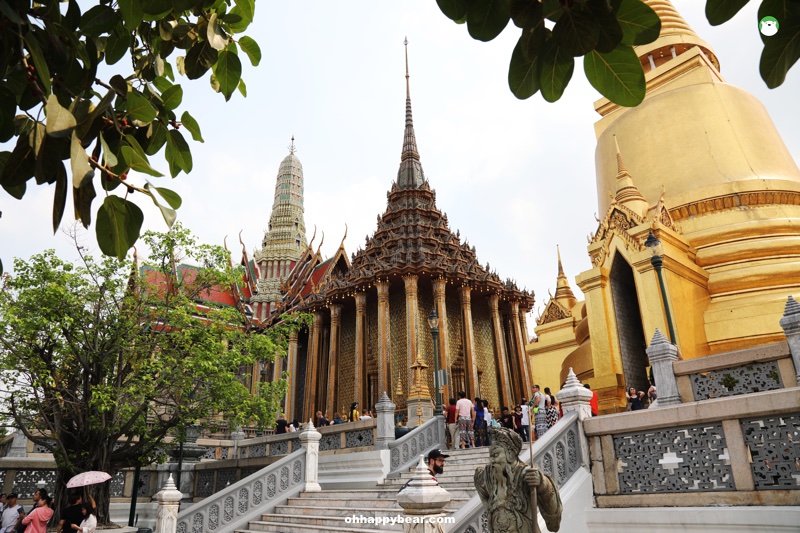 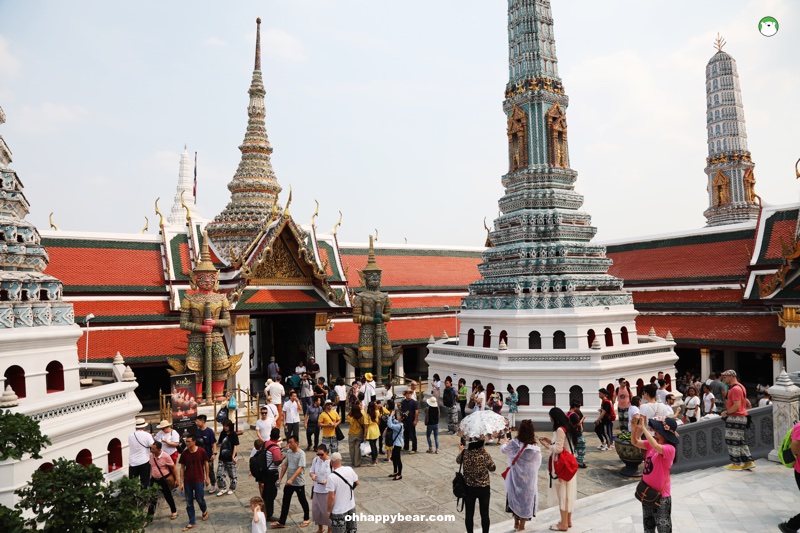 This is the gem of Rattanakosin Period (circa 1782) and the founding traditional arts and cultures that spread throughout thereafter. You cannot come to Bangkok and even think to skip this. Growing up, we Thai students spent a huge amount of time ‘field studying’ The Grand Palace and The Temple of the Emerald Buddha, but as aforementioned, it took me years of seeing the world a bit to come back and fully appreciate what is right in front of my eyes. Exquisite details of traditional craftsmanship, golden and gilded, masterful marquetry of all things.

Also, take your time walking through the surrounding mural-covered walls inside the Emerald Buddha Temple. These are the master of the master murals, depicting, of course, the full saga of Ramayana. My favourite mural is the Gallery #53 (below), depicting Hanuman Swallowing Pavilion, the original mural was painted back in 1930, and restored in 1974. There are 178 murals in all, accompanied by 224 poems depicting the saga. Should take you about an hour or so slowly walking through these magnificent things. 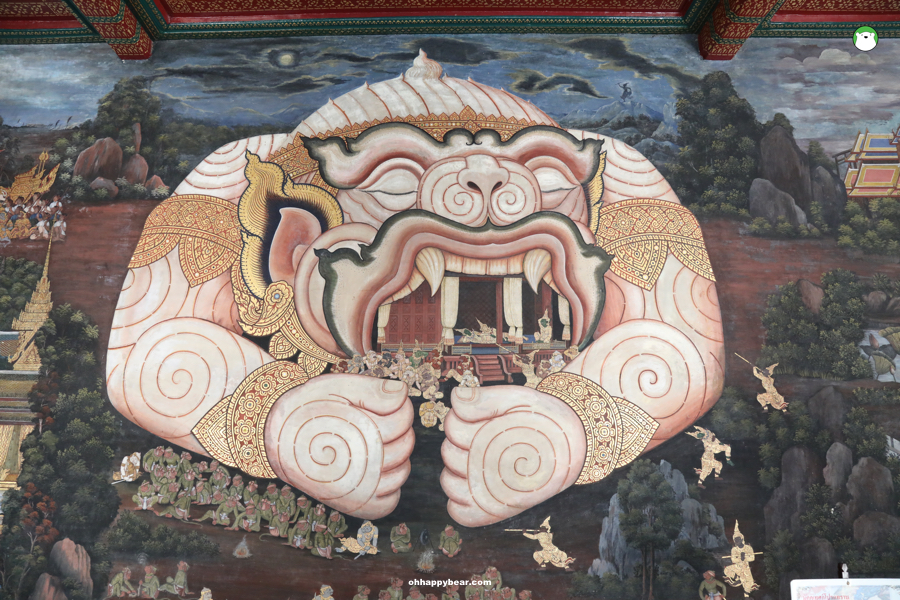 Above: Gallery #53 of the murals at The Temple of the Emerald Buddha in Bangkok, depicting Hanuman swallowing pavilion. 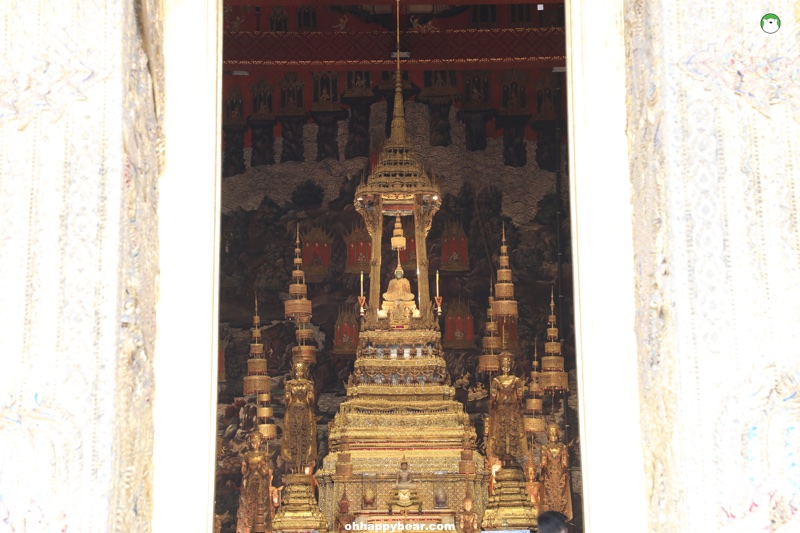 Above: The 46-metre Reclining Buddha at Wat Pho. 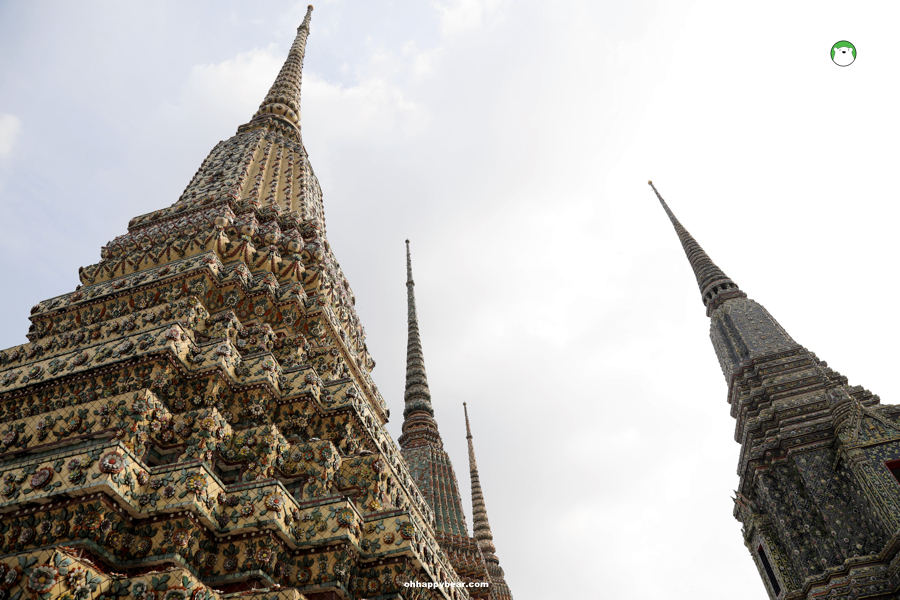 One of the largest and earliest first-grade royal temple, Wat Pho was established first (on the earlier temple site) by King Rama I (1782 – 1809) when he was founding Rattanakosin. But it was until the reign of King Rama III (1824 – 1851) that the temple was extensively expanded and renovated. That expansion included the now world destination, the 46-metre long Reclining Buddha and the marble illustration and inscriptions of human anatomy – the base of the traditional Thai medicine, that was recognised by UNESCO in the Memory of the World Programme since 2008. Above: The marble illustration and inscriptions of human anatomy – the base of the traditional Thai medicine, that was recognised by UNESCO in the Memory of the World Programme since 2008. 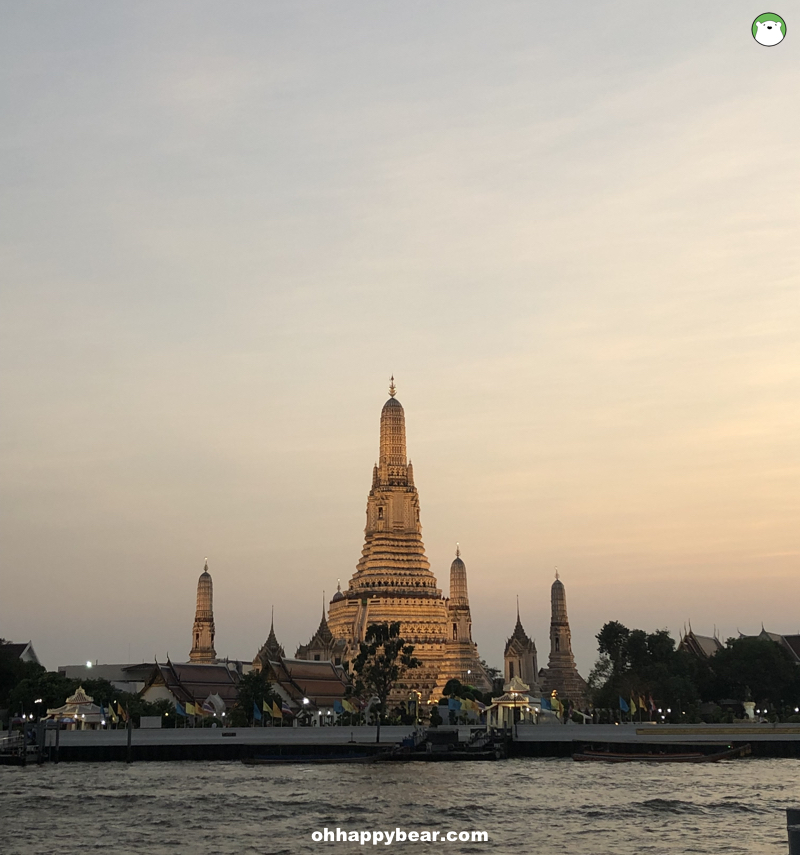 Above: Wat Arun or The Temple of Dawn at dusk from the opposite side of the Chaophraya River, Bangkok.

The temple that has been around since the Ayutthaya Period, it even appeared in the ancient map drawn during the reign of King Narai (1656 – 1688). The masterpiece is the Khmer-style central ‘prang,’ surrounded by smaller prang in four directions. The temple was extensively renovated recently, now with their signature porcelain-encrusted Prangs appear more white-washed and drew wide criticism, but still a draw (at least for me) nonetheless. 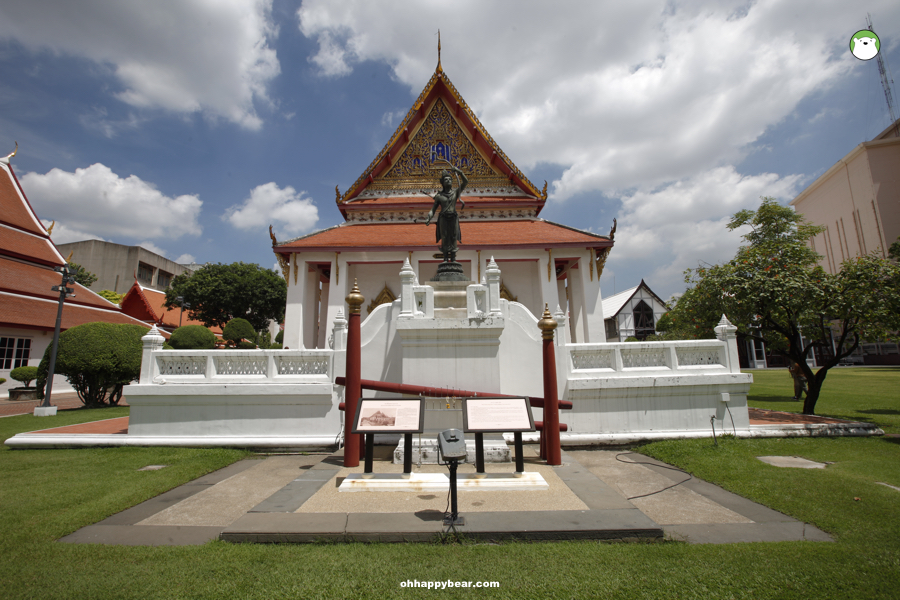 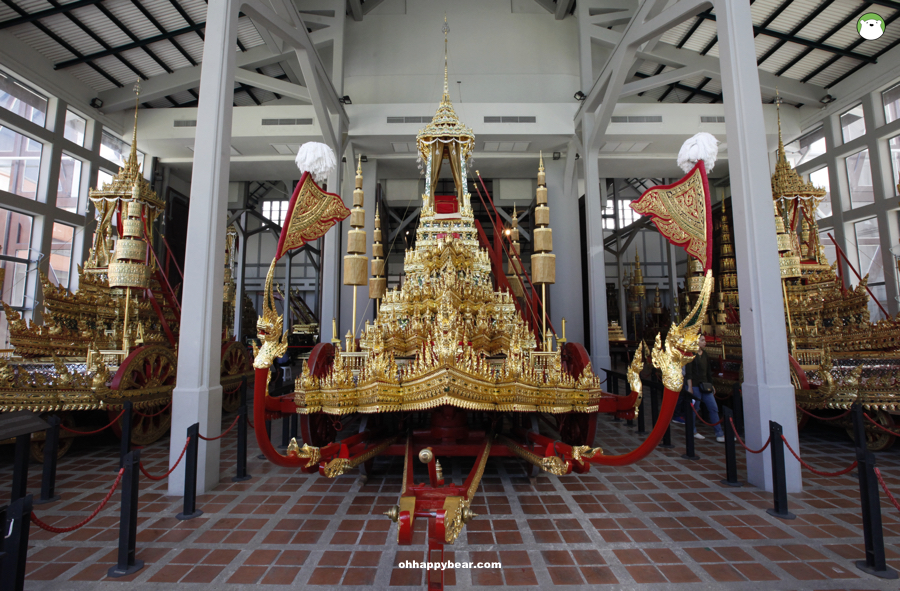 Above: The Royal Carriage Museum inside the National Museum Bangkok, with royal chariots used in the royal cremations.

Located in what used to be ‘Wang Na’ or Front Palace – the royal residence of viceroys, The National Museum Bangkok – founded with the royal initiation of King Rama V (1868 – 1910) is the treasure-trove, showcasing Thailand’s largest collections of ancient artefacts and antiques. Since 1934, this museum has been an invaluable ground to study the roots of Thailand. Recently, new exhibitions have been arranged and they have become my favourites. A great place to walk through and appreciate the so very intricate craftsmanship of Thailand. Should take a couple of hours. At the very back of the museum is a mom-and-pop food stall that serves cold drinks. 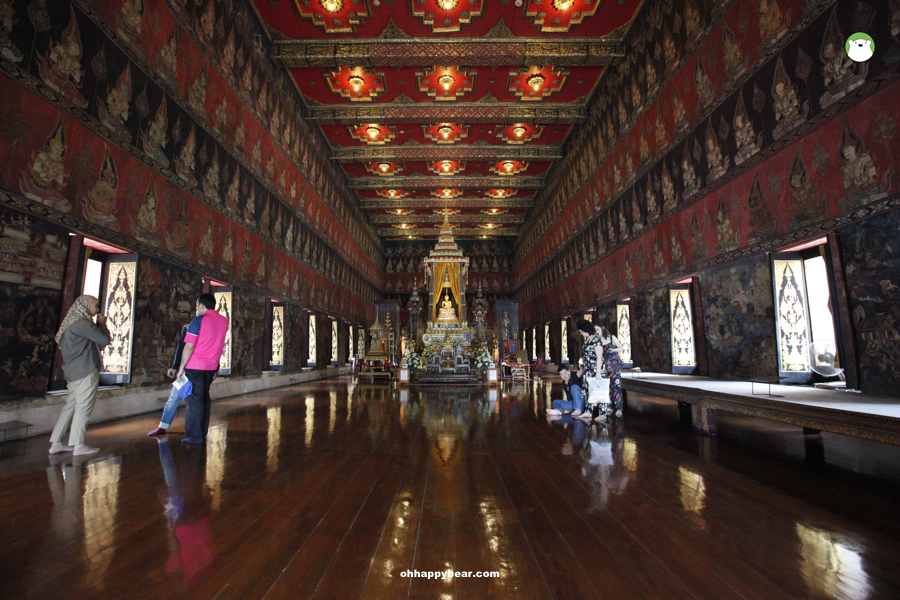 Above: Phra Buddha Si Hing inside Buddhaisawan Hall in the National Museum Bangkok. 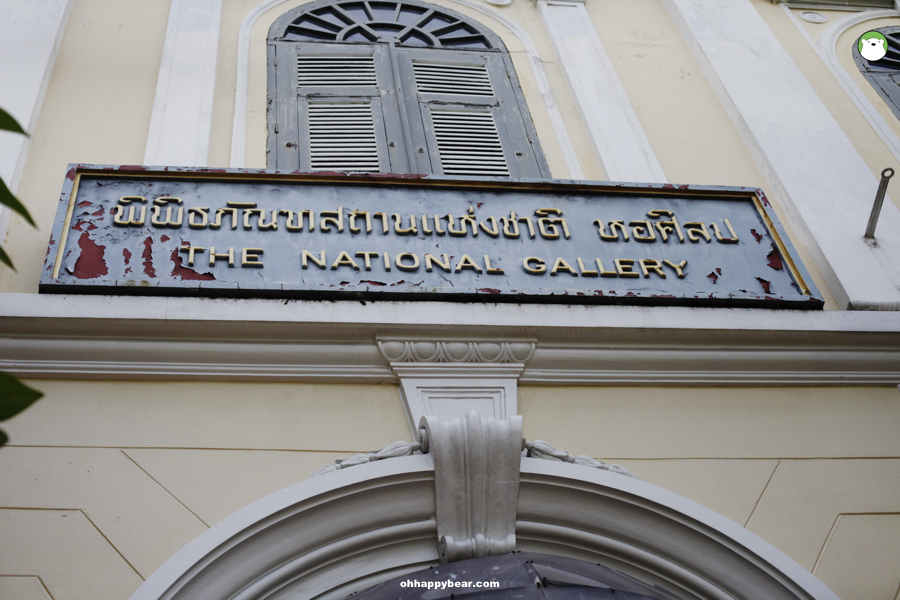 Located in a former treasury Mint, the National Gallery on Chao Fa Road houses treasures of artworks from the time of King Rama IV onwards. That includes Western-influenced paintings of the royals, illustrations of Thai mythological literature and the royal paintings by King Bhumibol Adulyadej (Rama IX). Small cosy place, a great quiet retreat from the bustle in the area. Also, sometimes with rotating exhibitions as well. We were there when the museum was having a spectacular exhibition on glass plates negatives. Loved it, you can read it here. 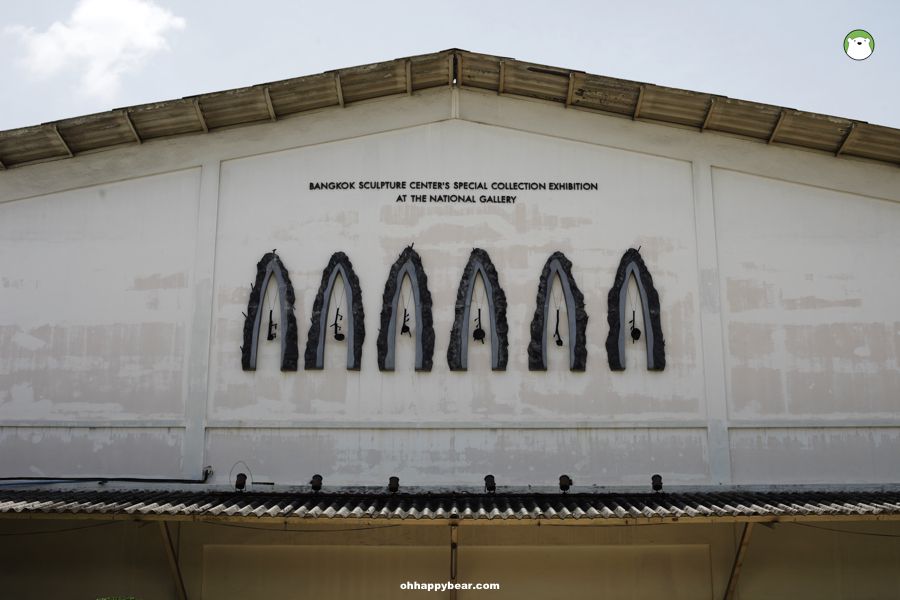 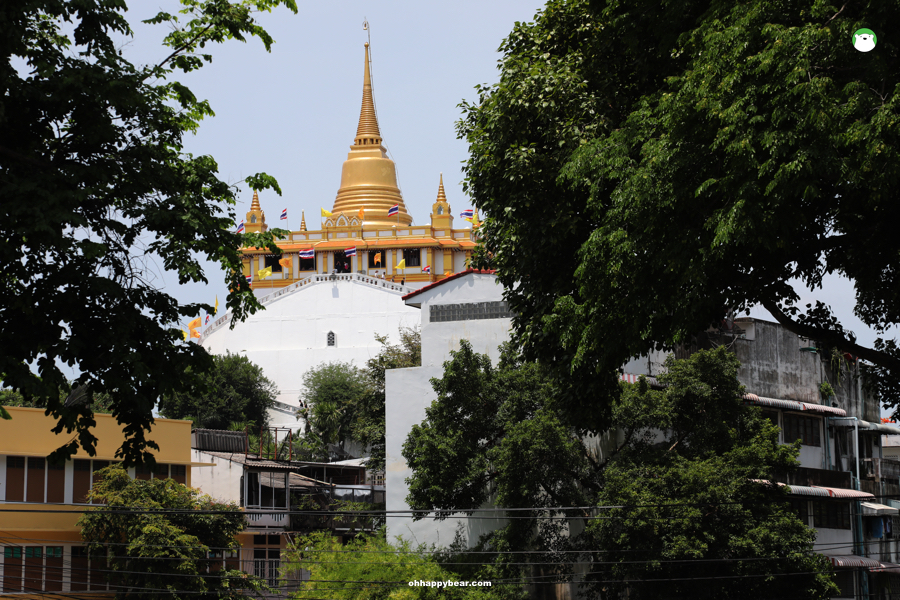 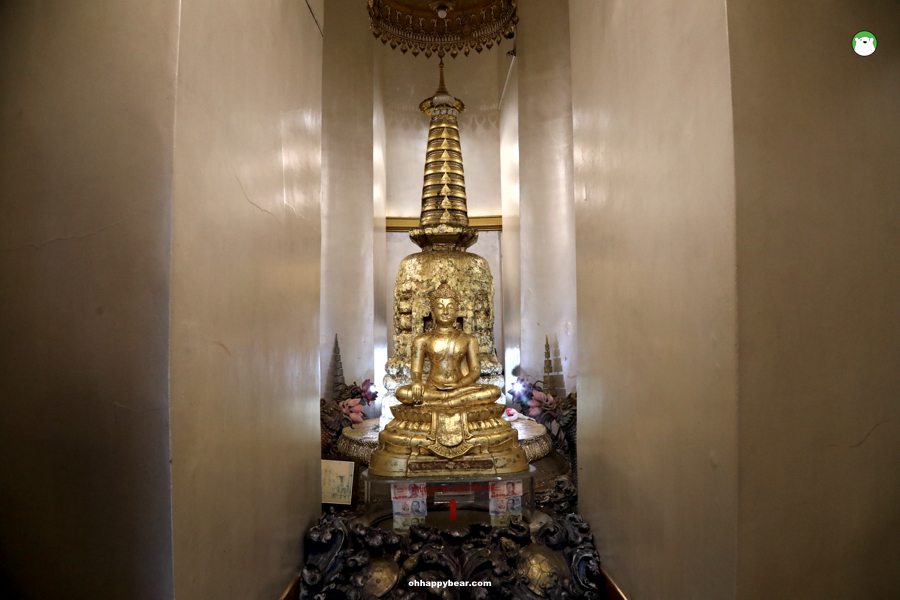 Conceived during the reign of King Rama III (1787 – 1851) to imitate an Ayutthaya-style pagoda, the Golden Mount or Phu Khao Thong (ภูเขาทอง) in Wat Saket was not completed until the reign of King Rama V (1853-1910) and became the tallest sacred grounds of the day. Now, in a clear day, one can spot Phu Khao Thong from a rooftop bar in town (say Ratchadamri Road). The trek up is nice and shady, and once you are up there, the gentle breeze will make it all worthwhile. Climb further though, through a small ladder, and pay homage to the enshrined Buddha relics at the top of the golden pagoda. Above: Pathway leading down from the top of the Golden Mount in Wat Saket, Bangkok. 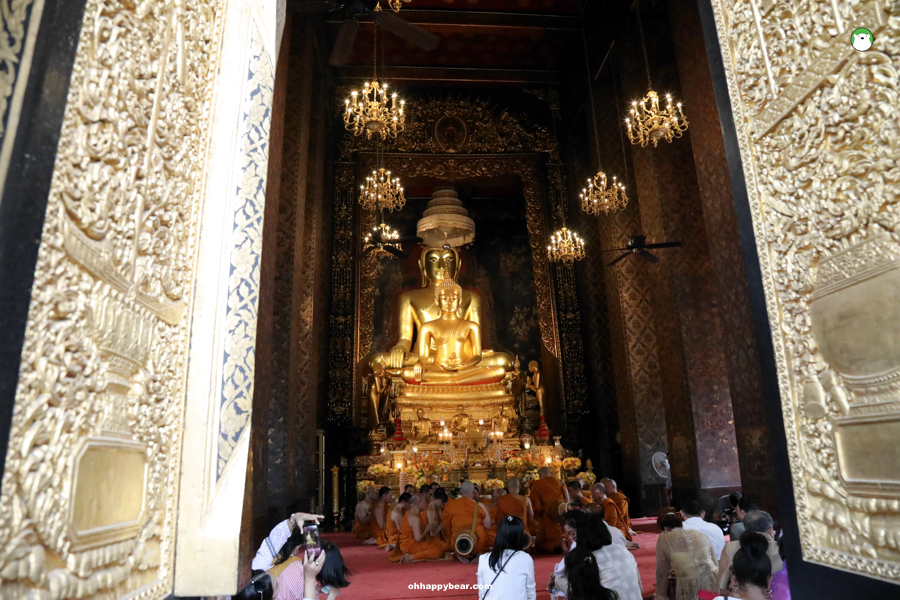 Above: Wat Bowornniwet’s main ubosot also features two, not typically one, main Buddha Images. The front Buddha Image is Phra Buddhashinnasi from Phitsanulok, the back is Phra Suwannakhet from Phetchaburi. Now the ubosot also enshrines the royal remains of King Rama IX.

A royal temple with a very interesting history, Wat Bowornniwet has a long line of monarchy supports, from its first abbot, being the then Prince Bhikku who later became King Rama IV. Later to the modern day we saw the late King Bhumibol Adulyadej, while maintaining his monkhood, back in 1956, resided here at this temple. Many of the old photos of those days are still at this temple. King Prajadhipok is the name of King Rama VII who reigned when Thailand was on the verge of revolution. The monarchy was overthrown by a military coup d’etat in 1932. King Prajadhipok gave up his throne and Thailand was then ruled, in succession, by military leaders from then until after World War II when the country has the first election in 1946. 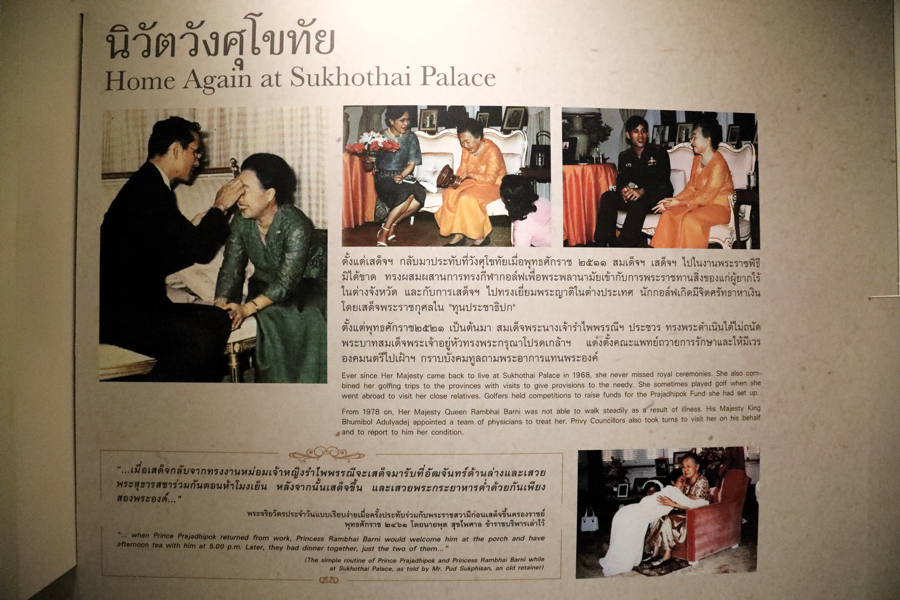 This museum, for me, is a revelation of its own. The histories of Thailand during this period was somehow left out and obscured. This museum tells all there is you need to know how Thailand has come to be as we are today after that abrupt change. Or you can read the history of Thailand during that time from here, too. Read More of Our Bangkok Guides

26 Best Dishes to Eat in Bangkok