Above: The gorgeous sunset at Wat Paknam Phasi Charoen to end the tour.

Bangkok, (16th January 2022) –A friend who used to be on her bike a lot is now chilling on a boat. And she chooses her boat wisely. We are not on just any regular boat, but an emission-free, solar-powered, all-electric boat, cruising along a small canal just off the main thoroughfare of the Chaophraya. It is early morning, and we have a full schedule ahead of us.

Little Route Bicycle Tour, a small private biking tour that used to focus mainly on cycling trips, has since COVID pivoted a bit. Instead of focusing solely on two-wheelers, they are now offering a bike and boat combination. Or for those who are extremely inert, like us here, a full-day boat trip on small canals around Bangkok. Above: Eating is a part of our full-day boat tour along the tributaries of the Chaophraya.

The following is our schedule that started at Wat Intharam in Thonburi. We embarked on Khlong Bangkok Yai and cruised west towards Talad Nam Khlong Lad Mayom before heading back. Remember, this is a private tour, so the program can be wildly adjusted for each group.

3:00 pm – Transfer into a rowing boat, meandering into a smaller canal where there are a bunch of banyan trees near Khlong Lad Mayom Floating Market

Typically, Bangkok’s rivers and canals are dominated by diesel-powered vessels. From river-crossing shuttles, express boats, and dinner cruises, to vessels like cross-country barges, long-tail boats, and so on. But then, COVID hit, and a few folks whose livelihood depends on the river had time to rethink. And they came up with this new way to showcase their rivers. A way that has successfully eliminated emissions, diesel-oil waste (boats need to change oil every 50-100 hours, much shorter intervals than cars), and also the thundering noises that typical boats produce at every turn. Above: On the Bangkok Yai River, heading west. You see a diesel-powered long-tail boat, the bridge, cars, and, above everything, the Skytrain that has now reached this part of town.

Fully charged, this solar-powered boat can run a whole day and more thanks to its rooftop solar panels. The boat seats about eight people and carries enough clean water in a reservoir on its roof for the day’s use. There is also a foldable table, which is very practical for the guests who are expected to eat all the way through this tour. 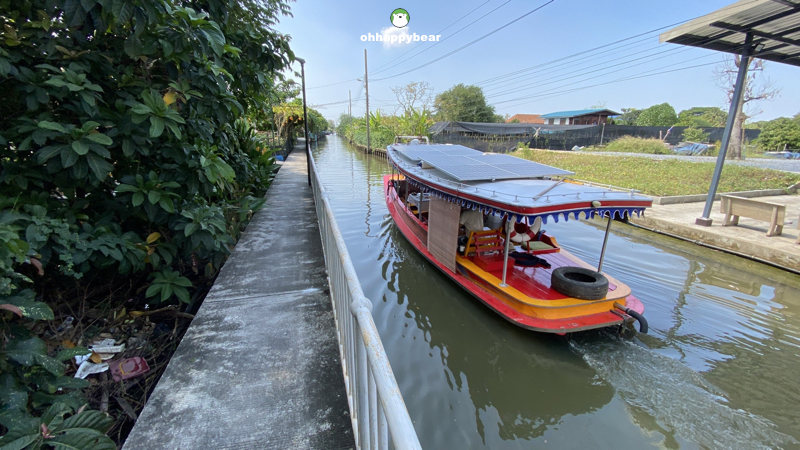 Above: Our vessel of the day is this solar-powered, emission-zero taxi boat that can seat about eight people in all. With rooftop solar panels, this boat can run for a whole day and more.

Sitting on the boat looking at the passing shores offers a great new perspective. It is much more pleasant than my other river cruise experiences. There are no engine sounds, and we can really talk on a human level. We can even hear the birds singing and the surrounding cacophony. It was so great. 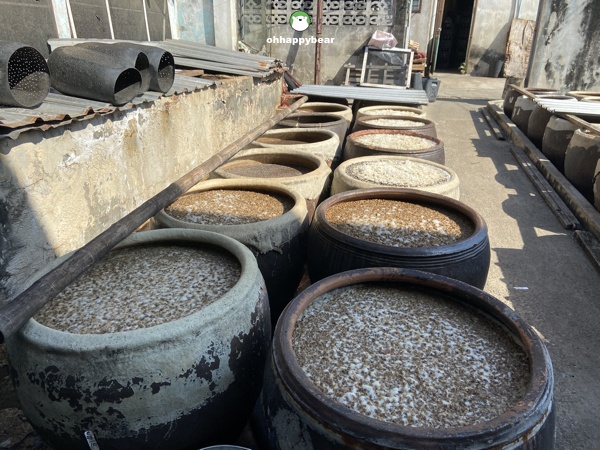 Above: Our first stop at this centuries-old fermented bean (Tao Chiew) factory.

Thonburi is an old settlement. The area is even older than Bangkok, which was founded on the eve of the Rattanakosin Era. The thing about Thonburi, or what Bangkok folks would call “Fang Thon” (translated as the bank of Thonburi or “the other side of the river”), is that there are still a lot of living and breathing traditional old communities around. The homes that line the canals here, even now when roads have replaced the rivers as the way of life, still retain their own piers. Some with actual boats, some with lounge chairs, some with a pack of dogs roaming free. Above: White Tao Chiew เต้าเจี้ยวขาว in the process. This kind of fermented soybean will go to chicken rice restaurants for the dipping sauce.

Talk about traditional places, and we made a stop at the How Yong Seng (เฮ้าย่งเซ่ง) fermented bean factory. They produce a variety of fermented beans, or Tao Chiew (เต้าเจี้ยว), and soy sauces and molasses used in old-school Chinese restaurants. Here, fresh soybeans are washed, steamed, and fermented at various stages. The owner, Khun Somchai Kamolsakdavikul, led the tour. He said his factory has been around for over 100 years, and he is now passing everything on to his sons. 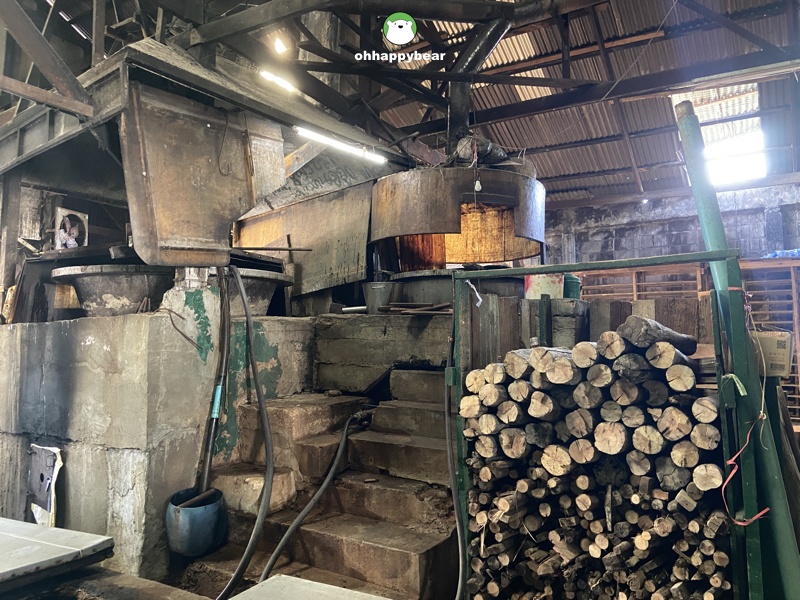 Above: This is the factory’s centuries-old wood-fired stove that simmers molasses and soy sauces prior to the bottling process. 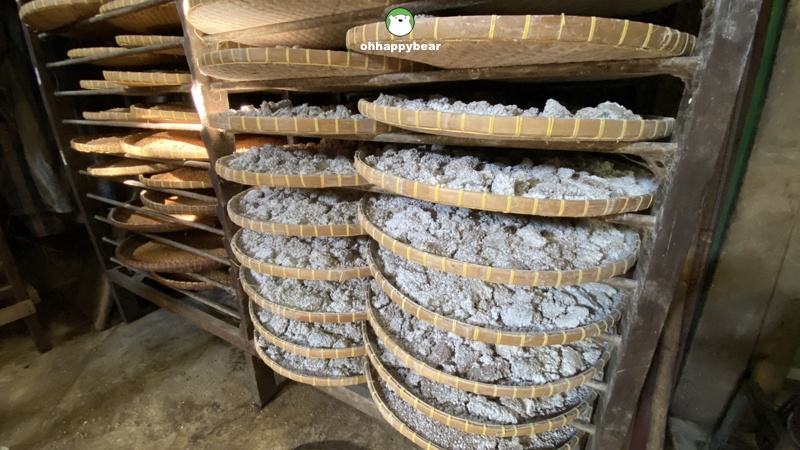 Above: The different stages of fermentation at the soybean factory that is still using wood as its power source.

Some historical places, such as the centuries-old Sum Sua Gok Aoung Shrine, are only accessible via the river bank. At the entrance to the shrine, a beautiful fluffy cat greeted us, and we went in to learn, from its keeper, that this riverside shrine, once a community sacred ground, was left abandoned when the roads, which have replaced the community’s means of commute, did not reach its premises, making it hard for worshippers to come by. Also, this beautiful shrine was almost lost in a big flood not too long ago. Luckily for all of us, it was saved by the community and is now open to anyone wishing to pay homage to their sacred gods and goddesses inside. 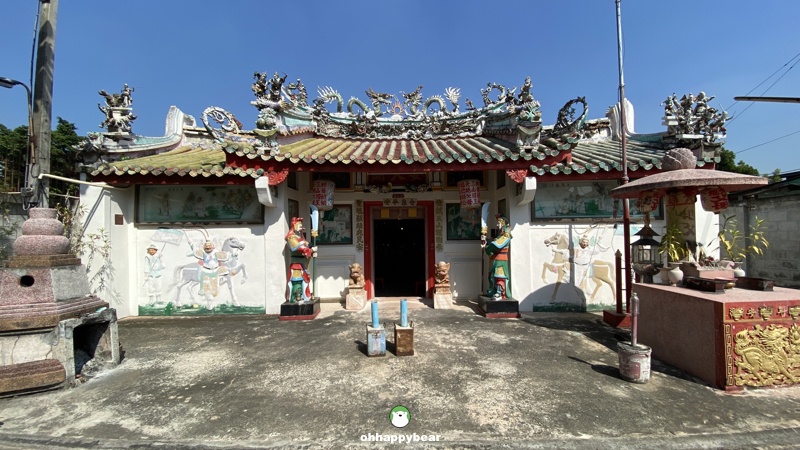 Above: The ancient Sum Sua Gok Aoung Shrine is only accessible via the river bank. Above: Our group was listening to a brief history of this Sum Sua Gok Aoung Shrine from its keeper.

Cruising on the Chaophraya’s tributaries means observing Bangkok in a new light. A lot of the goings-on remain old-school and truly charming. BBQ boats, for example, have their grilling smoke and aroma preceding their appearances. But then, there is this very special “Ruea Boat” (เรือบด)—a tiny solo-manned rowing boat— that that day sells, depending on the rower’s whimsical moods, steamed sticky rice with banana or Khao Tom Mad ข้าวต้มมัด Above: Ruea Boat with the rower who showcases his skillful maneuvers with consciousness. That day, he was selling his homemade Khao Tom Mud, or steamed sticky rice with banana (wrapped in banana leaves).

Ruea Boat is a testament to consciousness. This small boat is not easy to maneuver: the rower must be seated right in the centre and row in such a way that the boat is stable enough in this water to weather larger vessels. Above: BBQ chicken boat with the grilling smoke preceding its appearance.

Things get much quieter when we get to Klong Bang Cheuk Nang, which weaves west. Busy waterways gave way to small orchards, people’s backyards, and old-style riverside homes with private piers where their dogs lounged lazily alongside their owners. Some treated us as one of the day’s main events by barking their lungs out at us. In fact, these pets vary so much in character and form that taking their sights along the way made my day. 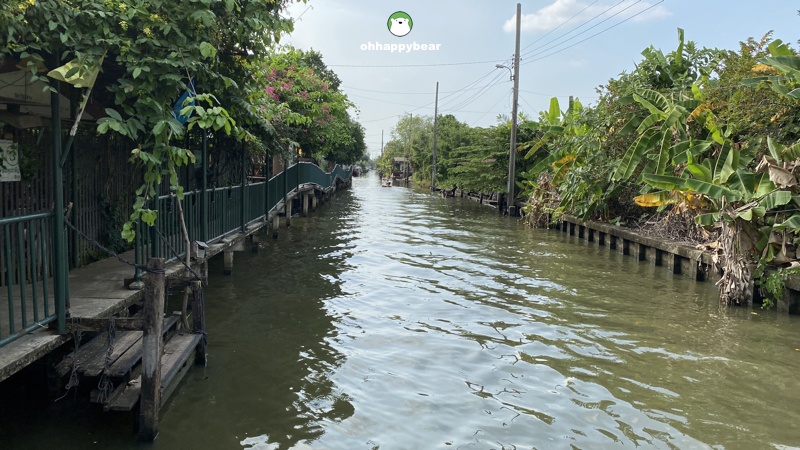 Above: Things got much quieter when we got to Khlong Bang Cheuk Nang that weaves west from the Thonburi side of Bangkok. Above: A sleepy dog we met on one of our stops on Khlong Bang Cheuk Nang in Thonburi. Above: We stopped at Ban Suan Bonus, a cafe and restaurant on Khlong Bang Cheuk Nang, for a hearty lunch. Above: Among the highlights are riverside dogs of all sizes and forms that we met along the way.

Our last stop before heading back was Talad Nam Khlong Lad Mayom in the Taling Chan area. This floating market is active during weekends, so when we were there on a weekday, it offered a rare ambiance. The market is very quiet, with more locals gathering for a song or two of karaoke, sans audience. A pack of dogs greeted us, vigorously, and we were transferred to a wooden boat and ventured into the banyan tree grove for a quick tour. 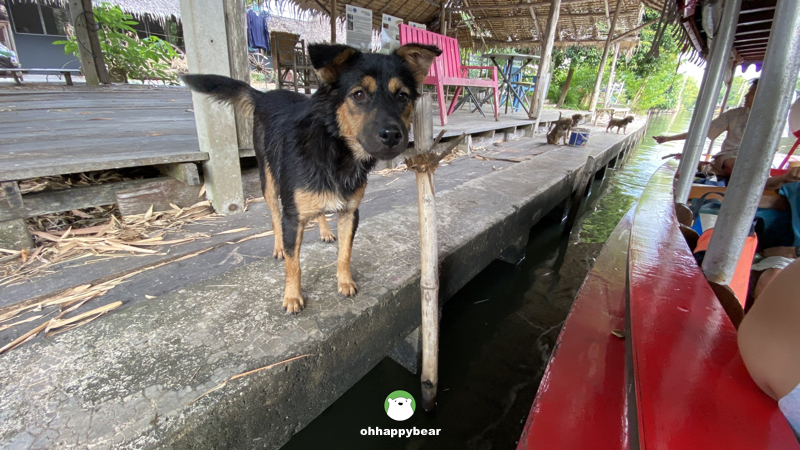 Above: The very curious puppy and her pack greeted us at the Talad Nam Lad Mayom Floating Market. Above: We were on an old rowing boat, going in for a view of a banyan tree grove. Above: I bought the bananas for myself and the birds at this riverside supermarket. 😀 Above: The oily-faced us at the end of the tour, with the backdrop being this gorgeous sunset over Wat Paknam Phasi Charoen in Thonburi.

The Hidden Treasures of Ayutthaya