Kanchanaburi, October 2020 – It was late in September when we planned a trip to Kanchanaburi – the lush, forest-thick province about 160 kilometres west of Bangkok. It has been ages since I was there the last time, and now, with the Thai government’s Rao Teaw Duay Kan #เราเที่ยวด้วยกัน tourism stimulus to promote domestic tourism post-Covid-19-lockdown, we wanted to be there for three nights and explore as much as we could.

For most of the world, Kanchanaburi is known for the much-storied Bridge of the River Kwai. This historical bridge is a part of the ‘Death Railway‘ that was rush-built by the Japanese troops allowed into the Kingdom during World War II. This bridge and much other wartime memorabilia still draw people from all around the world to this province. 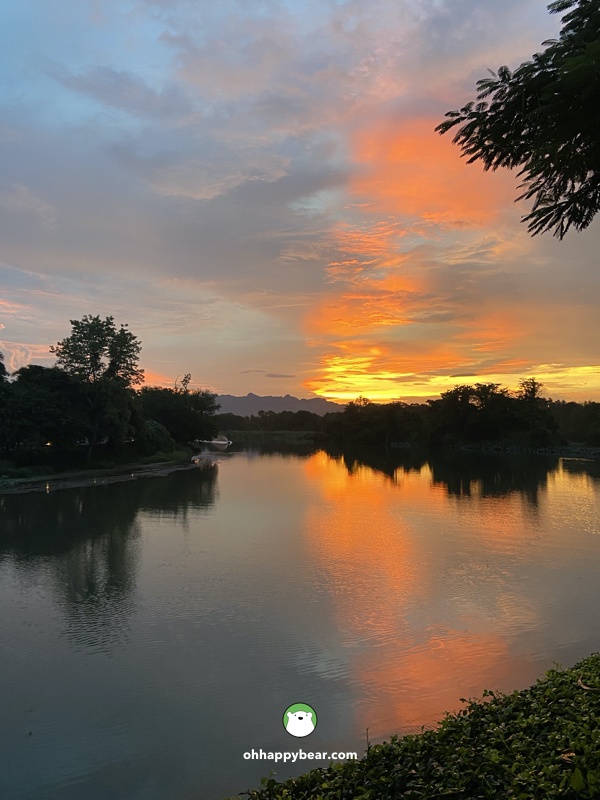 Seize the Day! Or in this case, the sunset!

#1 – You know the phrase. ‘Seize the day,’ they said. And it was ever true in many situations. This is our first and only beautiful evening while in Kanchanaburi. The forecast said storm prior to our trip, but we got too many storms this year to count. And so we went, weathering all kinds of, well, weathers! You never know what’s gonna happen next. For sure. Look at 2020! So, it’s better to seize the day. So we took about 30 pictures of this same sunset, from the same corner, at our hotel, at this curve of the River Kwai.

And also here that sunset in time-lapse, you can see a tug boat pulling a disco raft along. A very Kanchanaburi kind of vacation, if you will. 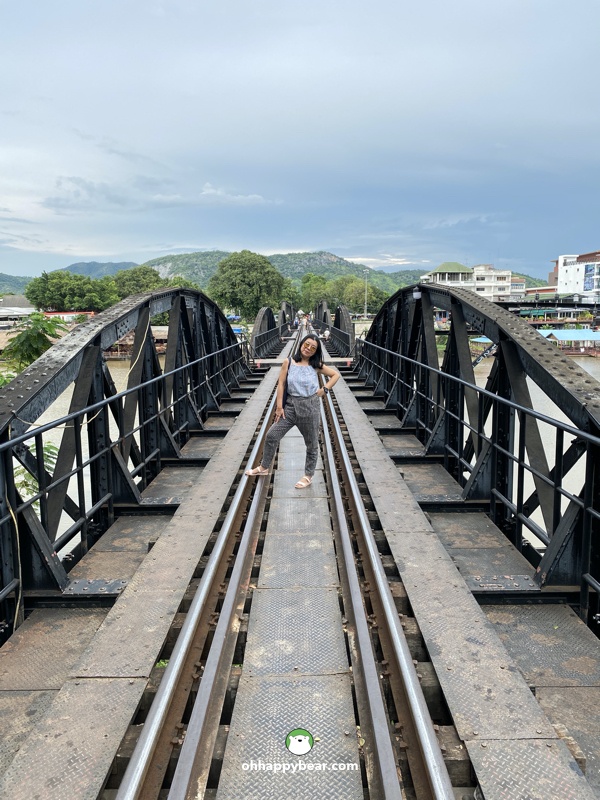 Me at the Bridge!

# 2 – A rite of passage when it comes to Kanchanaburi. This Bridge over the River Kwai is a part of the much-storied 415-kilometre Death Railway that starts from Ban Pong district of Ratchaburi, meandering west through Kanchanaburi, and ends at the port town of Thanbyuzayat in Myanmar. It was a part of the Japanese troop’s strategies to convey people and supplies during wartime. The construction was brutal and it was said that a man died for every sleeper laid on the railway, hence the horrid name! The railway is still in use, but not that whole much, and most of the time, the bridge is laden with trotters from far and wide who come over for a good snapshot of themselves and the history. 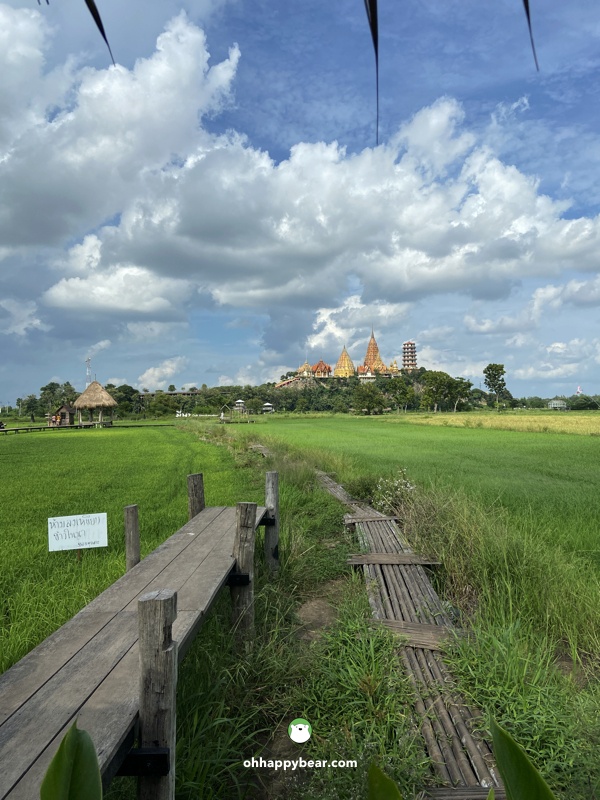 Rice Paddy and the Temple

# 3 – Wat Tham Suea (seen above from afar) is one of Kanchanaburi’s most visited destinations. But if you don’t feel like climbing up the stairs to portray your sweaty devotion, you can still see the temple from afar by stopping by one of the cafes and restaurants that line the other side of the rice field.

We stopped at a cafe called ‘Meena’ or something and found their space quite lovely with drinks and desserts reasonably priced. Beware though that this is the time of instant and nonstop gramming, hence be patient when people around you do nothing but taking their own selfies. 😀 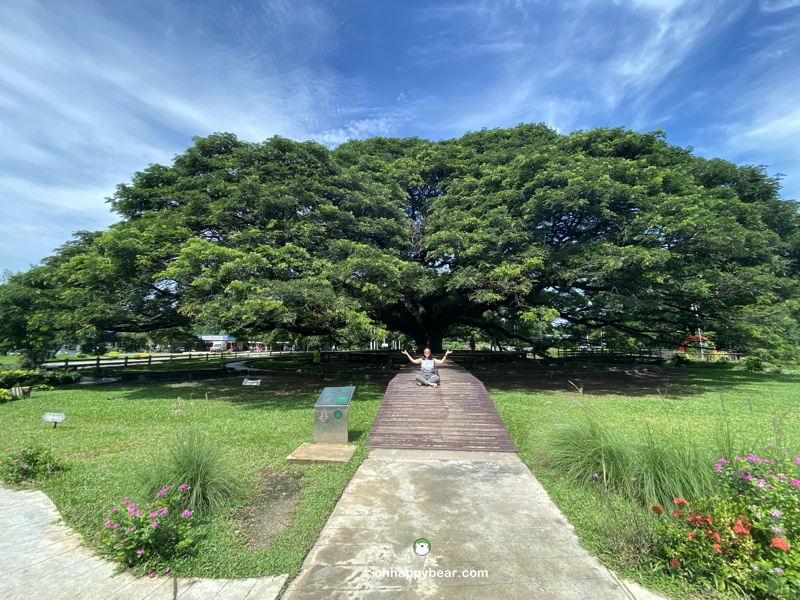 Enlightenment under the tree 😀

# 4 – The Giant Rain Tree is located not too far from Wat Tham Suea, but in the opposite direction, and you’ll need to drive into a narrow community road until you feel like you are getting lost, but then you will see one or probably two or more buses loaded with tourists heading or coming back from this attraction.

This centuries-old rain tree is spectacular and amazing! As a part of the Army’s Veterinary & Remount Department, this ancient treasure is well preserved. Now with a wooden bridge built around the perimeter of the tree to prevent visitors from stumping onto its expansive roots. We were there just before three buses coming in, hence the above picture. Lucky me. Nearby is the shrine of the Rain Tree Goddess. I don’t know if you believe in gods or goddesses, but I do. I found spirits in every living thing. And this old tree, saved and cherished, is something I believe to contain a serious guardian. 😀 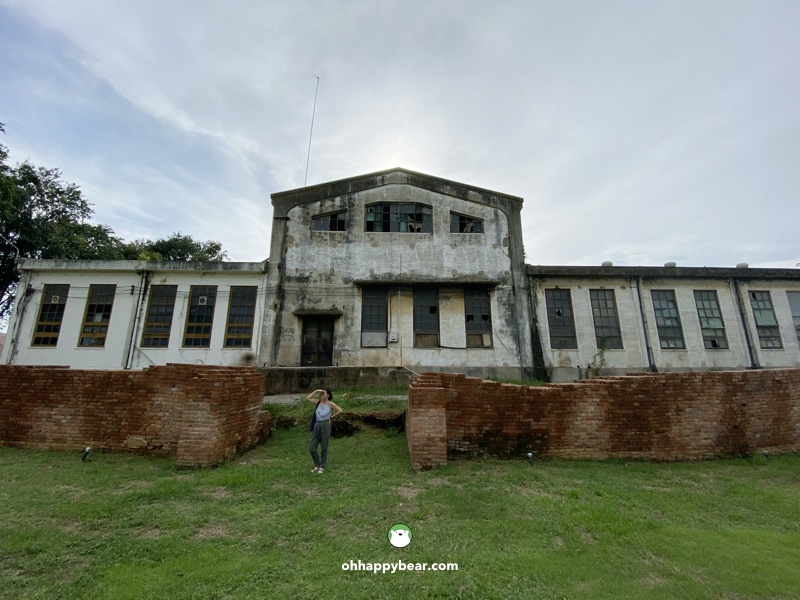 # 5  – …Or not, who knows! 2020 is amazing in a way that it is truly amazing and brutal and real, and put us all in place. It started with the wildfires in the Amazon, and then in Australia, and then, in the US, and then the pandemic which is still pretty much ongoing! This paper factory, abandoned as it is, has been brought back to attention by Kanchanaburi locals who were trying to revive the local tourism economy. Another remnant of World War II, this once the country’s largest paper factory stands as it used to be back in its heyday of 1938. This place produced paper from bamboo pulp and fed it to banknote production. Now, as glorious and stark and barren as it is, this plant has become a sensation of late when visitors, ourselves included, sneaked in for some pictures.

The facility is half-enclosed by thick moat-style red-brick walls. The plant is right in the city centre and the best time to be there is one clear afternoon when the sun is less scorching. A great place to observe the peace which was intervened only by the chirping birds and the scurrying and rustling sounds of squirrels in motion. 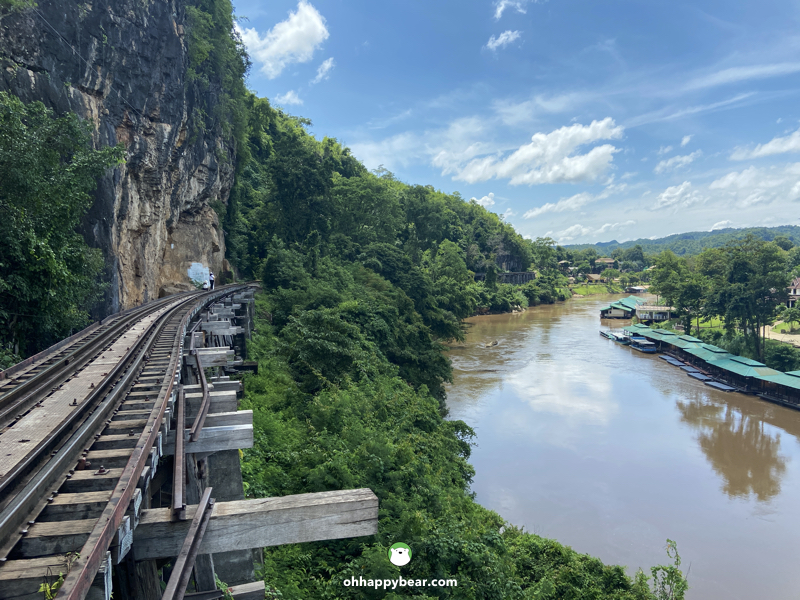 An outing into the past!

#6  – Krachae, Sai Yok District is where this iconic stretch of the Death Railway makes a meandering path west, on route to Burma. This poignant stretch is also where the railway got ever more serious. Things got to another level of brutality. You can see here from the challenging terrain of the place, the railway – all wooden in structure and sleepers – contours the roundess of the cliff. One side is the river, the other is the sheer wall of the mountain. Now, we are talking about the 1940s, deep in the forest, hands and hand tools, and a lot of beating and man-to-man cruelty.

Now, this part of Kanchanaburi draws visitors from everywhere, a good part of them are those on pilgrimage voyage to their ancestors who were here during the time. Nearby the viewpoint here is a cave with the enshrinement of Buddha image. A great place to reflect and think about what each of us can do to make the world a better, not worse, place. 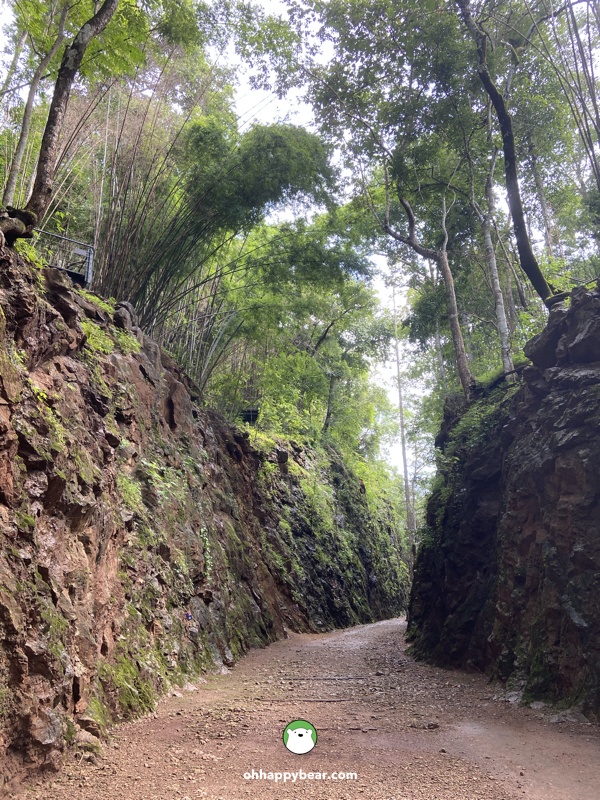 # 7  – We made it to the Hellfire Pass Interpretive Centre ศูนย์ประวัติศาสตร์ช่องเขาขาด – a memorial to the brutal wartime facts and how cruel humans can be with one another. Now at peacetime, we cherish, learn, and remember and be thankful for those who got us out of the situations that, if succeeded, could have made the world a much different place.

This Hellfire Pass was perhaps the most torturous part of the Death Railway. It was left abandoned deep in the jungle until the Australian Government, the Office of Australian War Graves (OAWG) made an endeavour to make a proper remembrance of the history. Australian soldiers and civilians made a good portion of the captive Allied POWs that were forced to complete the railway.

Opened 25 April 1998, Australian Anzac Day or veteran day, this memorial tells the stories of the situations from many survived POWs who were actually here. From the 10-min video to the trek, this is a poignant visit. But now, when things quiet down, it is quiet to the point that there are absolutely no sounds whatsoever. Not even a cricket. We were here early in October in what hopefully was the final stretch of the monsoon season. Nature is lush. Lots of grounds covered in moss. Like thick carpets. The cutting of the rock mountain, making way for the railway you see was completed in about 6-week time. Hand tools, a lot of beatings and torture, torchlights blazing through the nights resembling, what else, hell. 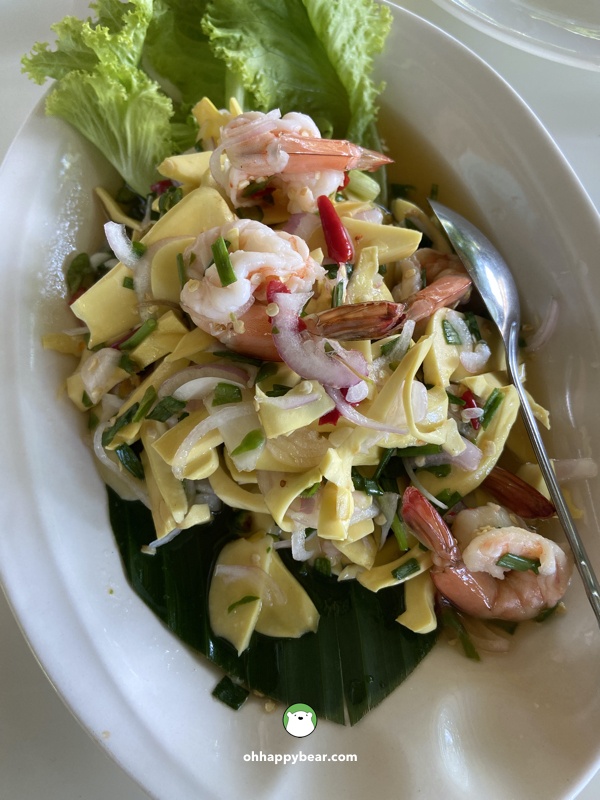 Jackfruit has no boundaries!

# 8  – One thing I learn about Kanchanburi in this trip is that the province, for the most part, caters to group tours, mostly in busloads, not less. This place, called ‘Pirom Park,’ that we went for lunch (a result of googling), is packed with long tables that can fit not a big family, but a half portion of a busload. Let’s say the tables are as long as the eye can see here :D.

Anyway, the tables aside, their jackfruits are also the point of interest. As it turned out, they are a jackfruit orchard who makes do, in normal times, with the exportation of jackfruits and deals with tour groups. Now, as we all know, Covid-19 changed everything and there are people here and there stopping by for lunch. But their menu, with jackfruits as the star, is very interesting. We had this Thai salad of young green jackfruit with shrimps, and we also had an omelet with jackfruit, plus a jackfruit smoothie!! Way to Jackfruit, I’d say! 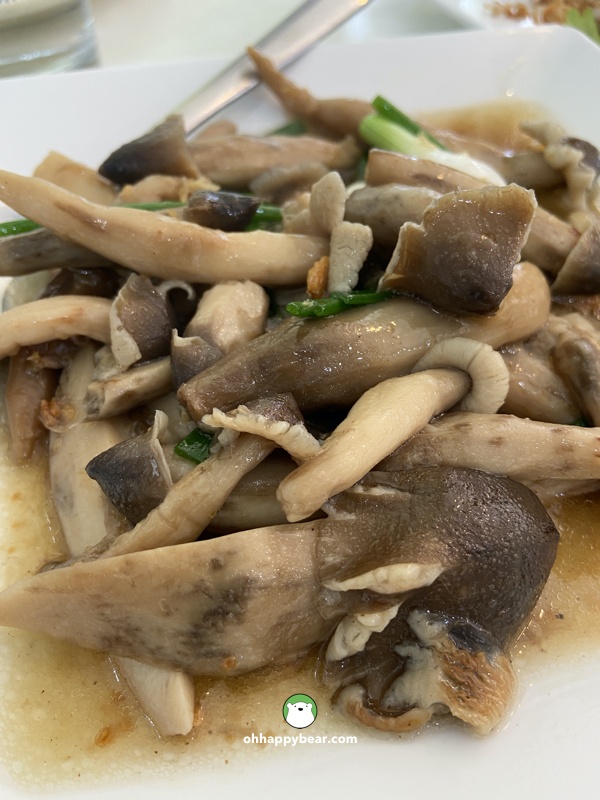 To a delicacy that I would never understand!

# 9  – Talk about expectations and I’ll tell you what I expected upon my very first bite of Hed Khon (above) เห็ดโคน – the highly-priced, much-coveted type of wild mushroom with the cap not unlike a bearskin head.

I expected this pricey mushroom to fill my nostril with the scents of the earth, the fragrance of fresh rain upon the grass, the terrain of lush forest, and the profusion of wild nature. After all, this is the much-talked-about delicacy. Something people who call themselves even a bit of a foodie would precisely coordinate their visit with the blooming times of this special fungus. But then again, at least for my untrained nose, there were no such scents. I chewed, inhaled, chewed, inhaled. No luck. Another bite. Sans talking, zero distraction, still nothing. Conclusion: either it is me or the mushroom which somehow in this world can be fake, I detected nothing that makes it any more special than other mushrooms on the shelves. Sorry. Haha. At least I got to try it for once.

P.S. The Hed Khon mushrooms are seasonal, the time to eat is from October – December, after the rainy season. 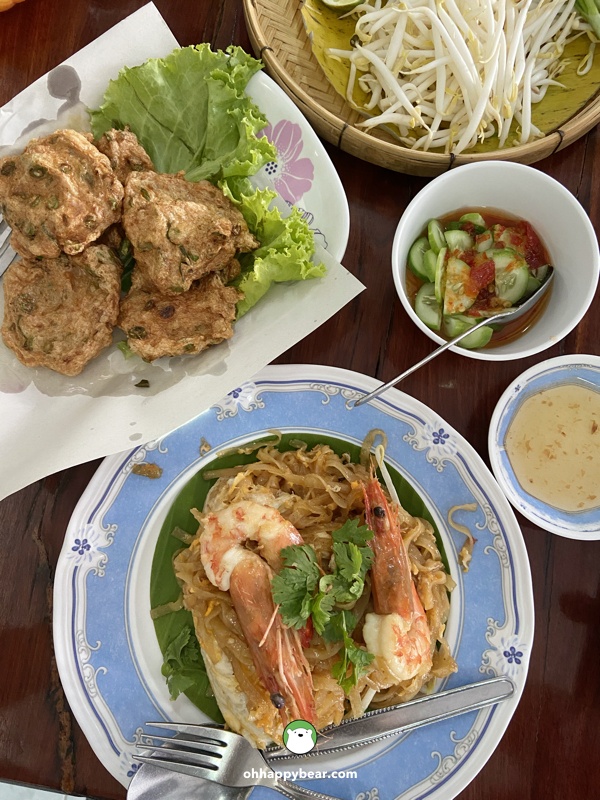 # 10  – Foods in Kanchanaburi, if you will, are mostly wild, reflecting its still pretty untamed surroundings. If you have heard about ‘wild curry’ or ‘gaeng pa’ – the fiery version of Thai red curry and love super spicy dishes, Kanchanaburi is definitely the place to try. Two dishes that we ordered, one wild curry, another red curry stir-fry, were way too torturous even for my spicy-loving palate. I was then stuck to Tod Mun or Thai fish cakes, which I found exceptional even at a nondescript place known for their Pad Thai and one-plate meals.

This place of Tod Man and Pad Thai is called Soon Heng ซุ่นเฮง about 15 kilometres north of Kanchanaburi’s town. I found it a very charming place. And by charming I mean no-frills, no stories, no built-up passion from the so-called chefs, no unnecessary twists in stories and tastes, just plain old place that sells good food unpretentiously!

A Slow Visit to Sukhothai, Thailand (See, Eat, Do)