I use to draw solid lines separating types of foods I know. But years go by and those lines slowly blurred, merged, or even disappeared. Walking any market in Bangkok or anywhere – even in small sub-districts – in Thailand, I realize one thing. It is quite difficult to pinpoint a purist amidst the multitude forms of foods available in my own country. Now more than ever, I realize that Thailand is a port of all different cultures, merging everything we know into one big pot of deliciousness. But then again, there are certain dishes that can be said to be the epitomes of Thai food. Eating them in Bangkok would definitely widen your views on our national cuisine. And through them all, are the answer to the question ‘Is Thai food always has to be spicy?’

Above is Nam Prik Pla Ra (น้ำพริกปลาร้า) – made with fermented fish that gives this version a tasty spunk.

As you might be able to gather, a bowl of Nam Prik consists of chillies, garlic, and sometimes shallots, and then additional ingredients that would give that Nam Prik a unique character. It can be the shrimp paste, the aromatic grilled mackerel, the fermented fish or Pla Ra, the crabmeat (my first picture on this post), or whatever the ingredients that would make the Nam Prik taste good. Usually, those add-on ingredients are regional. In the North, preserved nuts (Tua Nao) are usually added for umami. But when it comes to the coastal provinces, we see seafood being used. Crab roe chilli paste is one of my favourites as well as fresh shrimps chilli paste.

Above is Nam Prik Ma Muang (น้ำพริกมะม่วง)  –  With green mango adding to the sourness instead of green lime.

Above is Nam Prik Ra Gum (น้ำพริกระกำ)  –  with Salacca, shrimp paste, shrimp, and so on.

Also, a lot of sour-tasting fruits are used to flavour Nam Prik. Instead of the usual green limes, green mango, salacca (Ra Gum), or bilimbi (Taling Pling) are often used when in season. This is one charm of Thai food. We taste as we cook, and we adapt as we go. And that’s why sometimes even following the recipe can be hard. Sometimes, it means you need to grow up eating the food to discern the tastes.

The spicy levels of each Nam Prik also differ. Even for the same type of Nam Prik. Nam Prik Kapi is perhaps the most varied in the levels of the heat, depending on personal preference. And that’s why, sometimes you’d see whole small chillies on top of the bowl, just in case someone wants his or her bite with extra zing. A good bowl of Nam Prik should be balanced in tastes – spicy, sour, salty with sweetness as the balm – making everyone be nice to one another.

However, some types of Nam Prik are known for being very spicy, as they can be. For example, Nam Prik Noom of the North, Nam Prik Pla Ra of the Northeast, and Nam Prik Tai Pla from the South.

You have all heard about them all – the green curries, the red curries, the globally famous Massamun, Panang แพนง and so on. In terms of textures, though, I would say there are two types of Thai curries: ones with coconut milk and ones without. All the aforementioned contain coconut milk, with its texture ranging from luscious to almost-thin. Mussamun, which, in fact, is a Muslim Thai staple, is an example of an extreme lusciousness. A good bowl of Mussamun should be simmered for hours, with all ingredients, especially the potatoes melting into the curry, thickening it to the max. Instead of with rice, I like Mussamun on a thick hearty toast. It is the way to go for this particular curry. Mussamun is an example of a curry not known for being spicy. In fact, it is rather sweet and aromatic from all the spices and herbs.

Curries that do not contain coconut milk are usually fierier than the first category. In some parts of the country, they can also be torturous. For example, Gaeng Pa – or the red curry without coconut milk has so many spices and herbs on top of the curry paste, and they are usually pretty peppery and extremely spicy. Meanwhile,  a bowl of Gaeng Som (แกงส้ม) which is a tamarind-based curry that is usually made with seafood, can vary in its spiciness. Gaeng Som in Bangkok is usually, but not always, milder than, say, obviously the ones from southern Thailand.

Above is my own Gaeng Som – Bangkok style. Milder, but still quite fiery.

Above is a Southern Gaeng som – It is yellow thanks to Turmeric in the curry paste. This is a real deal: spicy to the max, but also very sour and balanced with saltiness. Awesome.

Because some Thai dishes can be spicy, we don’t usually have that dish alone. And that habit leads to what is called ‘Samrap’ or Thai meal which means a set of savouries to be shared in a family with each member having their own individual plate of steamed rice.

Above is my small samrap with a bowl of crabmeat chilli paste, assorted vegetables and fried fish.

As you might have already known, Thai eating is culturally a communal affair. We eat together, and eating is such a huge part of our lives that in the past it used to be that a generic greeting among friends or family was ‘Have you eaten yet?’ That question was not meant to be any intrusive. It was simply a way of saying hello. So, if you were greeted with such a question, just say, yes, or no. Or perhaps you might be invited over for a nice homecooked meal.

Above: You can also order your own samrap while eating out in a restaurant. This is our meal in Nakhon Si Thammarat lately with assorted dishes to be shared over rice.

Sampap came out of our shared-food culture. And the fact that we all used to live together – parents, grandparents, children, grandchildren – under one roof. And so that when we eat together, there are things to consider. Is this curry too spicy for young children? Is this beef jerky too touch for the elderly? Would this spicy stir-fry go well with this soup? Should we have something to cleanse our palate between bites? And so on, so on. So, this is a Thai housewife’s art of Samraping, if you will. First, everyone in the family must be able to enjoy one thing or two. Second, the selected assemble must go well together, tastewise. And then, yes, are they economically right? In season? At their primes? I can go on forever about this because Thai food, obviously, is the food I grew up eating. My mother is a wonderful cook. She made our foods every single day when I was growing up. I was also lucky enough to be her kitchenmaid sometimes, too.

Above is a form of Thai-style fluffy omelette. This one is not a typical homemade omelette you’d see in most cases. This one is also fancied up with crabmeat. and that came with a price which, unnecessarily, reflects the taste ;D.

If you like what we do, you can stay tuned for more stories about Thai food here at this channel by subscribing to our social media platforms as well as our YouTube channel. Thanks for dropping by.

Above is another meal at a Thai restaurant in Bangkok where sometimes, to cater to foreign patrons, they serve Thai food western way. Soup in small individual bowl instead of one big bowl to be shared.

P.S. While researching for what has been said regarding Thai food online, I came across this funny-but-true article by Thrillist.com about the usual misconceptions about Thai food and the rate of spiciness. It is worth reading. Please click here. 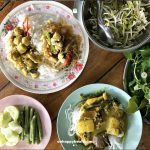