I never billed myself as an enthusiast of northern Thai food. Wading back through my Instagram posts, it’s pretty clear that I always went south. And the Thai southern cuisine, give or take, seems to be more available to me than the one from the north. Nonetheless, I occasionally crave good bowls of the northern Thai staples, namely Khao Soi and Khanom Cheen Nam Ngiew. Both are my favourites, but the latter apparently needs a PR boost.

Khao Soi and Khanom Cheen Nam Ngiew are first and foremost in the minds of travellers to the northern Thai region. While Khao Soi might be more photogenic, Nam Ngiew, for some reason, captures my heart. I remember slurping not one, not two, but perhaps as much as three bowls of Nam Ngiew in one go for breakfast one time in Sukhothai. The serving portions were small, that’s the reason! LOL. Yes, apart from Chiang Mai and Chiang Rai where people usually associate these two dishes with, Nam Ngiew and Khao Soi also proliferated throughout the entire northern region, say, from Sukhothai province and up.

Just to provide some bearings, Khao Soi is a curry-based egg noodle soup with coconut milk thickened with curry paste. The menu usually comes with choices of protein – from pork to chicken and beef. The egg noodles used in this case are boiled to cook and crispy-fried to provide a crunchy garnish (see the above picture). A Khao Soi is then served with shallots, pickled cabbages, toasted chillies and lime – the staple sides and condiments that offer the eaters a sense of liberty. For me, I’d add some shallots, giant squeezes of limes, and then a spoonful of toasted chillies. That’s my Khao Soi.

Khanom Cheen Nam Ngiew, however, is entirely different. Instead of the coconut-based curry, Nam Ngiew is a clear, tomato-laden broth of strictly pork –  spareribs, minced pork, and pork blood curds. The noodle, in this case, is the white fermented rice vermicelli or Khanom Cheen ขนมจีน which is eaten throughout the country no matter what region. Nam Ngiew bears its name from the key, but sparingly used, ingredient of Dok Ngiew or the dried cores or the pistils of the cotton tree (Bombax ceiba) that are pre-soaked and stewed together with the spareribs at the beginning of the cooking process.

The end result of a good bowl of Nam Ngiew is a delicious combination of gentle flavours. In a bowl, one can choose from not having blood curds and minced pork, and go only for the spareribs. I would do that and then ask for some extra broth which I enjoy very much with just a big squeeze of lime and a dab of toasted dried chillies. If I am very hungry (too often:), a northern meal for me will consist of these two bowls (one Nam Ngiew and one Khao Soi) and then a plate of deep-fried chicken wings. 😀

But then, the form of Nam Ngiew changes according to the places of their origin. Pictured above is the usual sight of Khao Soi and one small bowl of what I thought was the local version of ‘Nam Ngiew’ in Phrae แพร่ – another northern province just about 200 kilometres south of Chiang Mai. As it turned out, it was not. Even though it was served in a place alongside Khao Soi, this was no Nam Ngiew. It is called “Kanom Nam Sai Meung Phrae ขนมน้ำใสเมืองแพร่ or Khanom Cheen Nam Moo ขนมจีนน้ำหมู.” And Dok Ngiew was not part of their ingredients. The clear pork broth was so awesome I was so frustrated with the small size of the bowl it was served with. I was forced, not unwillingly though, to order several more just to keep my belly happy and content.

“We usually serve this Khanom Cheen Nam Moo in a small portion,” explains people at Vongburi House Museum คุ้มวงศ์บุรี in Phrae. “Story has it that since the noodle is made from fermented rice flour, it is advised that one should only eat a small amount at one go. Just to keep from bloating!”

And then, things kept surprising me, Khao Soi – the aforementioned thick curry noodle staple to the Thai North – even goes clear broth in the sleepy district of Chiang Khong เชียงของ in Chiang Rai. At a small but famous local place called ‘Pa On ป้าอ่อน,’ they serve this particular version of Khao Soi called ‘Khao Soi Tai Leu ข้าวซอยไทลื้อ’ which is entirely something else. It has nothing to resemble the usual Khao Soi we all come to know and love.

Take a look at the above picture, Khao Soi Tai Leu is made with rice noodles, not egg noodles. The broth is clear, pork-based, just to be ladled with the pre-cooked minced pork, spicy with a northern curry and aromatic with their local preserved beans (Tua Nao ถั่วเน่า). This part of the topping is called Nam Na น้ำหน้า or Jin Kua จิ๊นคั่ว and it reminds me of Nam Prik Ong น้ำพริกอ่อง, a minced pork chilli paste, another delicious staple of the Thai northern cuisine. Garnishes here include blanched vegetables, crushed fresh chillies flavoured with preserved beans or Tau Nao (instead of the toasted chilli), boiled eggs, and meatballs. So delicious, especially when it gets colder during the year’s end. 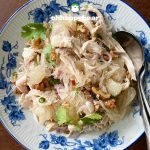