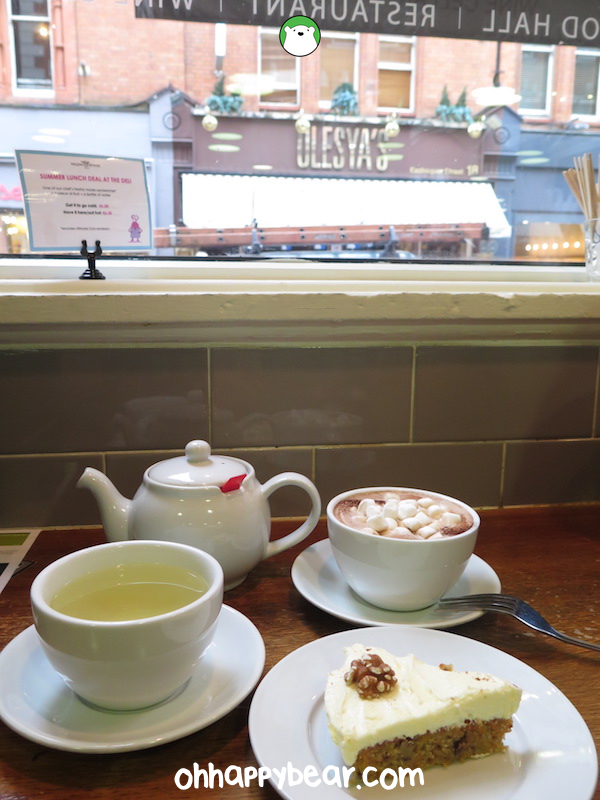 Who could deny a good cup of hot chocolate on a rainy day? NOT ME! Especially when that hot chocolate is also drizzled with a generous handful of marshmallow!

Well, it’s still us in Dublin, still happily brazing its ‘typical’ ‘authentic’ weather (read – clouds and rains and wind). The clouds were looming and we were walking our way back from the Guinness Storehouse into the old city. We actually made a quick stop at the Christ Church Cathedral, but because the daily mass was about to begin, we didn’t stay. We were just too hungry to spend an hour inside and wanted to walk into some good place we could sit before it started to rain.

The above hot chocolate was from one of my favourite places in Dublin – Fallon & Bryne – a restaurant, a wine cellar, a grocer and a cafe –  all in one building.

Since we already had a big lunch (pictures of our lunch down this blog), we just shared one piece of their wonderful carrot cake. I love their moist, not too sweet carrot cake with, very very importantly, a thick fat slab of cream cheese! So good.

It was starting to rain. We were ready with an umbrella. Here are the spread of their cafe. Self-serving style, order at the tab and choose your own table. Counter, street-facing bar stools or small round tables are available. They also have good-looking gluten-free cakes and cookies, too.

Here’s the front of their store. The street floor is also laden with fresh produce, cheeses, meats and seafood one can stock up in a home. Us, being tourists, bought some fruits and exotic snacks back to the hotel.

And here is our lunch at The Fish Shack Cafe on Parliament Street. Not too far from the central area. Just opposite Dublin Castle.

And yes, as visitors, a good dose of Irish history here is mandatory. Here is Dublin’s famous ancient Christ Church Cathedral in the Viking settlement area in the old quarter, hence built since the Viking era. The entrance fee is €6.00 each.

And then the Dublin Castle – the grounds of the ‘Irish Easter Rising’ back in 1916. The entrance fee is €8.50 for adult.

Through the Middle Ages, the wooden buildings within the castle square evolved and changed, the most significant addition being the Great Hall built of stone and timber, variously used as Parliament house, the court of law and banqueting hall. The building survived until 1673 when it was damaged by fire and demolished shortly afterwards. The Court of Castle Chamber, the Irish counterpart to the English Star Chamber, sat in Dublin Castle in a room which was specially built for it about 1570. The Castle sustained severe fire damage in 1684. Extensive rebuilding transformed it from medieval fortress to Georgian palace. No trace of medieval buildings remains above ground level today, with the exception of the great Record Tower (ca. 1228–1230); it is the sole surviving tower of the original fortification, its battlements an early 19th-century addition. Source: Wikipedia.

At the very beginning of the Easter Rising of 1916, a force of twenty-five Irish Citizen Army members were able to seize the entrance and guard-room of the Castle before reinforcements for the small garrison arrived.[7] During the Anglo-Irish War, the Castle was the nerve centre of the British effort against Irish separatism. On the night of Bloody Sunday in 1920, three Irish Republican Army members Dick McKee, Conor Clune and Peadar Clancy, were tortured and killed there. Source: Wikipedia.

Gibraltar and Implication Upon Brexit

4 Highlights in Dublin (When it Rains, as it Usually Does)

Hot Chocolate First, then Fish and Chips in Dublin